We use cookies on this website. By further use you agree to the use: More information I agree
> Awnings, Sunroofs, Tents>GRID FRONT for Isabella sun canopy Shadow The net front is a kind of shadow net, which can be easily fixed under the supporting poles of the "Shadow" for those who want both sun and shade in front of the caravan.

Not only does it provide welcome shade on a warm summer's day, but it also offers privacy, while at the same time being easy to see through from the inside.

The optional mesh front folds in the centre for those who want both sun and shade in front of the caravan. Shown here with the Shadow 400. 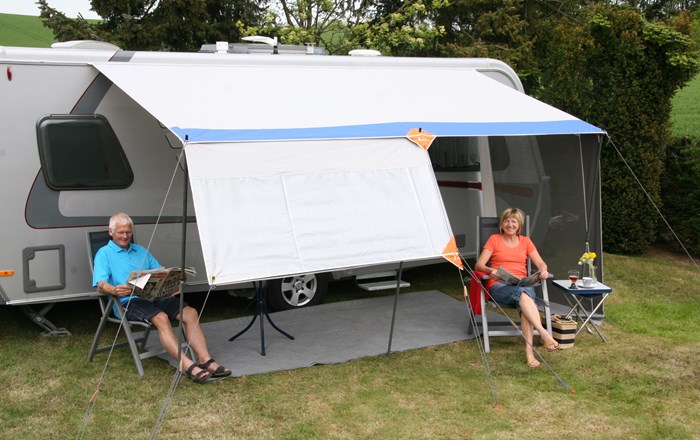 The days when a sun canopy was just a piece of fabric on the side of a caravan are over. The best proof of that is the Shadow from Europe’s largest specialist awnings manufacturer, the Isabella factory in Vejle, Denmark.

The wide range of optional accessories available is partly what allows the canopy to be used in so many different ways. The Shadow comes with two or three leg poles depending on the chosen size, 30-cm sand spikes and heavy-duty typhoon guy ropes. The two-metre deep canopy is now available in five widths, ranging from 2.4 metres to 5 metres, one suitable for every caravan on the market.

The optional accessories have been developed following requests from caravanners for more than just a sun canopy. The mesh front provides shade when required, as well as shelter from summer showers. New for the 2009 season is a mesh side section for those who want both shade and shelter. Mesh side sections are also compatible with the older versions of the Shadow sun canopy. Please note, however, that a modification is required in order to affix the FixOn bracket to a profile section.

The mesh fabric is ideal because it reflects the sun’s rays. In addition to providing welcome shade on a warm summer’s day, it also makes it difficult to look in but easy to look out.

The Shadow’s popularity also stems from the fact that both the canopy itself and the additional accessories are very quick & easy to assemble. The materials are all light-weight which makes the canopy ideal for touring caravanners and for weekend use when time is important.

Although it only happens during a few short summer months every year, the sun will occasionally get so hot that caravanners are forced to seek shade. This is certainly true for those who holiday in more southern climes. A traditional sun canopy is often a perfectly good solution. Following the wishes of many caravanners, however, the Danish Isabella factory has now come up with an additional shade designed to provide extra protection from the sun. As a further bonus, the Net Front also provides added shelter against the wind. The Net Front has been designed primarily to fit the awning manufacturer's best-selling Shadow sun canopy, but it can also be fitted to many other caravan sun blinds.

The Net Front is a type of shade net which attaches easily below the Shadow’s supporting poles. It is tensioned using the supplied support pole along with the three pegs and three guy ropes. The Net Front features a reflective sun net on the outside which provides shade. The net is easy enough to look through from the inside, but makes it hard to see in from the outside. In addition to keeping the strong rays of the sun at bay, the Net Front can protect you in showers.

The Shadow sun canopy, which is already in use by thousands of European caravanners, is now available in five widths ranging from 2.4 to 5 metres. The largest model was introduced new for the 2008 season. The Shadow is undoubtedly the most versatile sun canopy on the market. Originally developed purely for caravans, it is now used for estate cars, on terraces, on shop fronts, on the beach and even as a screen for overhead projectors and film showings.

Be the first to write your review!